Hello friends!  Today I’m sharing a couple of thank you cards, and a tag that I made using the Spellbinders October 2019 Large Die of the Month kit (DOM).  This month the kit is called Fall Flora, and it comes with 17 dies.

For my first card, I didn’t have a design in mind, so I decided to chose a fall color palette first.  Then, I diecut the pieces from cardstock scraps in my stash using my Platinum 6 Die Cutting Machine.  I layed out all the pieces trying to think of a design, and I realized I liked the way the florals looked, so I decided to use the diecut floral pieces on the background.  I glued them to craft cardstock, then trimmed it to about 4 x 5 1/4 in.  I diecut the Thanks sentiment 3 times, once from gold cardstock, and twice from white cardstock.  I stacked and glued them all together to get a thick dimensional sentiment.  I diecut the 2 fancy label pieces, glued them together, then glued the thanks on top.  I adhered the background panel to a white card base using fun foam, and then the sentiment label on top of with more foam tape.

I love how this card came out.

My next card was equally as unplanned as the first.  Since all the dies cut different pieces in one, I had a lot left over.  In particular, there’s a die that cuts 4 flowers and 4 holly berries.  I diecut that die several times with red cardstock, but only used the berries on the first card.  I had lots of red flowers left over, and I was trying to think of a way to use them all on a card.  I decided to diecut a heart from white cardstock, and glued all the red flowers on.  Then I trimmed off the excess flowers.  I wanted to keep this card fairly simple, so I adhered the heart to a white card base with foam tape.  Next, I wanted to add the thanks sentiment, but with the busy red floral heart, it didn’t pop out very well.  I decided to adhere it to a hand cut aqua banner, and I popped it up with foam tape as well.  Even though this card was made purely to use up leftovers, I love the way it turned out.

This card shows that you can make a card that would be great for any occasion…not just fall themed cards!

As with my second card, I had a few pieces still left over…most notably the pumpkin, so I decided to make a small gift tag.

I really hope you like my cards.  Don’t forget to check out the Spellbinders site for the different club kits, like the Large Die of the Month or the Glimmer Foil of the Month, as well as lots of other crafty goodies! 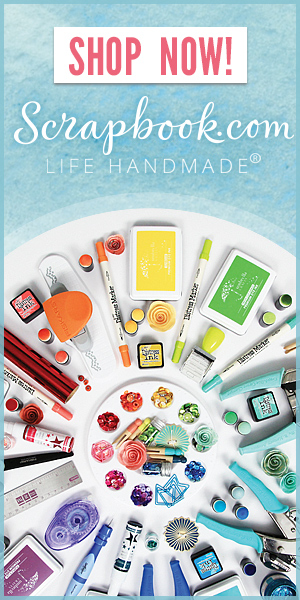